There are many types of dashcams. We may feel confused and have no idea which one to choose?  Well...read this article, it will be the ultimate guide to buying dashcam, giving you some knowledge from the aspects of function, selection, use, etc. 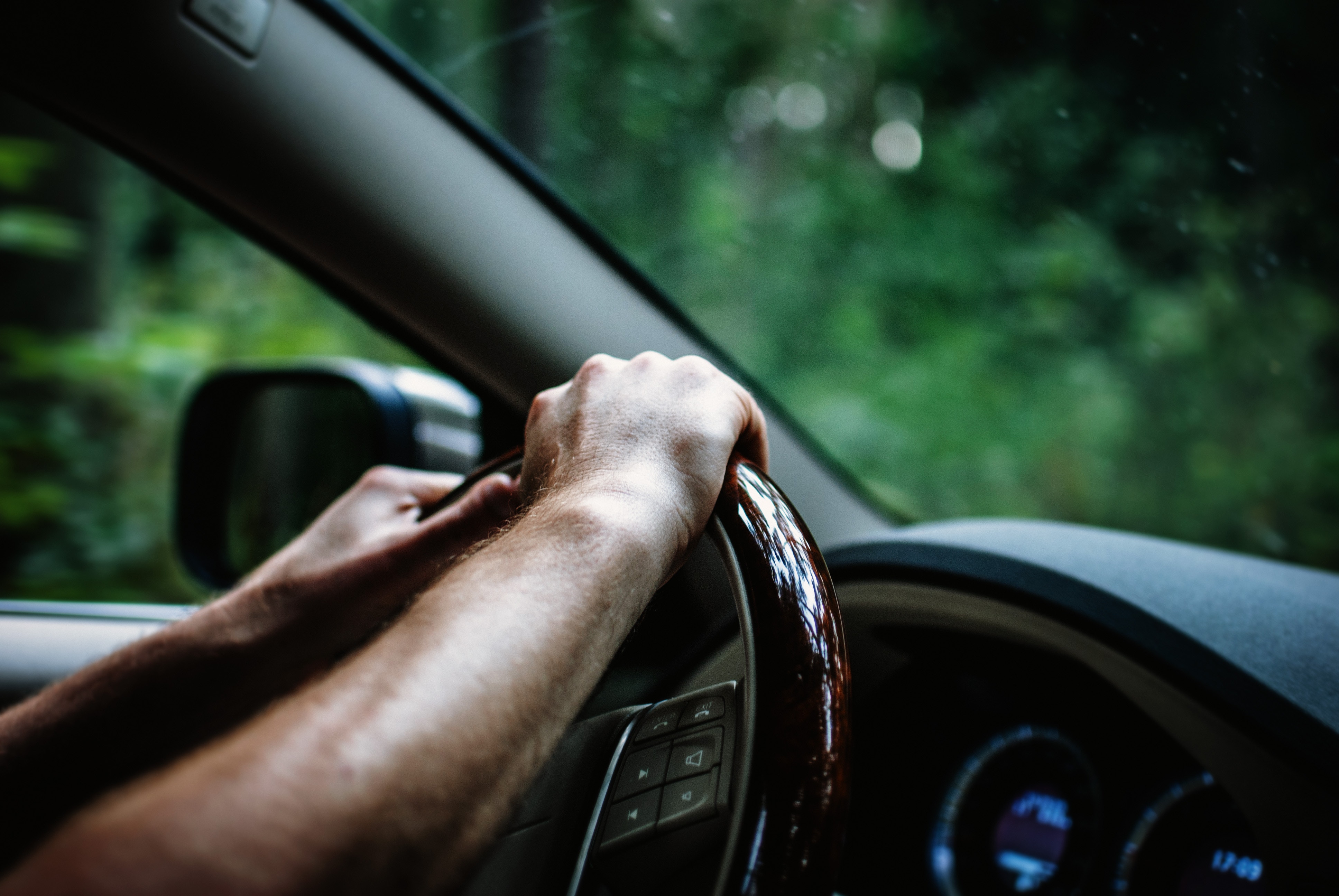 1. Why need install dashcam?
● Evidence to an insurance company (or the police) if there is a traffic accident or a car window is smashed. Many Uber and Lyft owners use the Dash Cam to record the situation inside the car. If there is a dispute with the passenger, there is evidence to support it.
● When you encounter traffic incident-faking extortionist, you can prove that it is not your responsibility.

2. Three important factors of choosing Dashcam
2.1. Camera angle
The larger the camera angle, the wider the range that can be recorded. Now, most dashcam viewing angles are above 120 degrees. Some models can reach 170 degrees, and there are 360-degree models.
However, the larger the camera angle, the wider the shooting range, the farther away from the object, the more difficult to see the details. Those who have played SLR cameras can easily understand that the farther you push the lens, the smaller the range seen and the clearer the object.
● with a 300mm lens, the feathers of the bird can be clearly seen from dozens of meters away, but this bird is the only object in the whole picture.
● with 16mm wide-angle lens, you can shot birds, trees, mountains, streams, the sky in one picture, but can not tell the feathers of the birds.
So...figure out what you care about most. If your fear is that someone will escape after an accident, then a lens with a less wide field of view could theoretically see the license plate at a greater distance. If the most important goal is to keep a complete record of what's going on around and even inside the car, then a wider angle of cameras should be chosen.

2.2. Imaging Quality
Dashcam is to record the accident process and provide it to insurance companies and/or police as evidence when needed. Therefore, the wider and clearer imaging,  the better dashcam.
Imaging quality depends on lens, sensor, and system configuration. Of course, environmental factors such as light intensity, angle, and vehicle speed all affect imaging quality. Under the same conditions, the higher pixel, the better. At present, the resolution of mainstream driving recorder is generally 1080P, and some models can reach 1440P.

2.3. Night vision quality and aperture
The quality of night vision mainly depends on two factors: aperture size; sensor ISO value range. The larger the aperture, the higher the ISO, the more sensitive to light, and the clearer the video can be recorded in the evening or even at midnight.
Dashcams with the same price, the sensors and actual ISO value will not differ a lot. The aperture size is a trade-off: the larger the aperture, the smaller the depth of field and the smaller the range you can see. For example, an EF 50mm f/ 1.4 Canon lens, when the aperture is maximized, focuses on the face, and the object 1 meter behind is completely blurred. In contrast, with small apertures, such as F10, the object a few meters behind can be clearly distinguished.
Therefore, if you often walk at night and the light is weak, in theory, choose a dashcam with a large aperture, and you can record a brighter video under the same light conditions. If you rarely travel at night, then there is no need to choose a large aperture for the pursuit of night vision quality. A small aperture dashcam has more depth of field and clearly shot the objects that are farther or closer.

3.2. Loop Recording
Most dashcams save a file every few minutes, rather than save a huge file until storage runs out. You can usually set it to be saved every 3 minutes, 5 minutes, or 10 minutes. When the storage used up, the system automatically overwrites the earliest video file and continues recording. 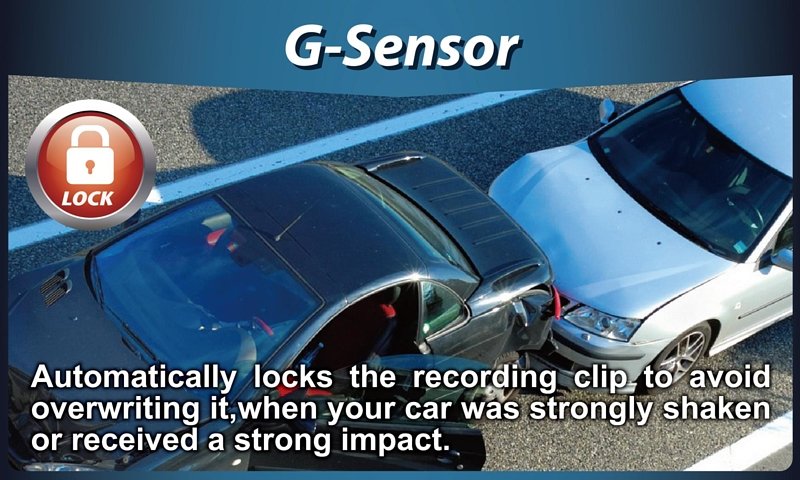 3.3 G Sensor
In the event of a collision, the dashcam senses a sudden change in position and will automatically lock the current video to prevent it from being overwritten by the system when the storage is full. Most dashcams also have a manual save function with a button to lock the current video.

3.4. Park Mode
Most driving recorders are powered by a cigarette lighter, and the driving recorder will sleep after the engine off. The dash camera with parking mode, even if the vehicle is in the off state, it will immediately wake up and start recording. The most common situation is that the car is scratched by another vehicle and suddenly shakes. Parking mode is also realized by changes in gravity, so some dash cameras classify it as the previous item (G Sensor), which is not listed separately.

3.5. Motion Detection
Even if the vehicle is in the off state, the motion detection will work if there is movement in a certain area in front of the vehicle, such as someone walking by and other vehicles approaching. Park mode works after a crash, while motion detection starts recording when other vehicles are approaching without scratching.
It should be noted that the dashcam equipped with a small battery only, and external power is needed for daily work, which is usually realized by the cigarette lighter. In the case of ACC off, the cigarette lighter has no power, the dashcam will not work.
To realize park mode and motion detection, there are two options.
● buy a hardwire kit and attach the dashcam to the car battery.
● buy an external battery to power the driving recorder. You may need one or even two cigarette lighters and USB cables.

3.6. GPS
With GPS module insides, the dash cam can track the real-time position of the vehicle. In addition, the rearview monitor can record the driving route, time, date and speed. It helps a lot in car-hailing business, providing security for both driver and passengers.

3.7. WiFi function
In my opinion, it is a useless function. It is usually used in case of an accident, but you do not open it most of the time. With the same quality, more features often mean more expensive. 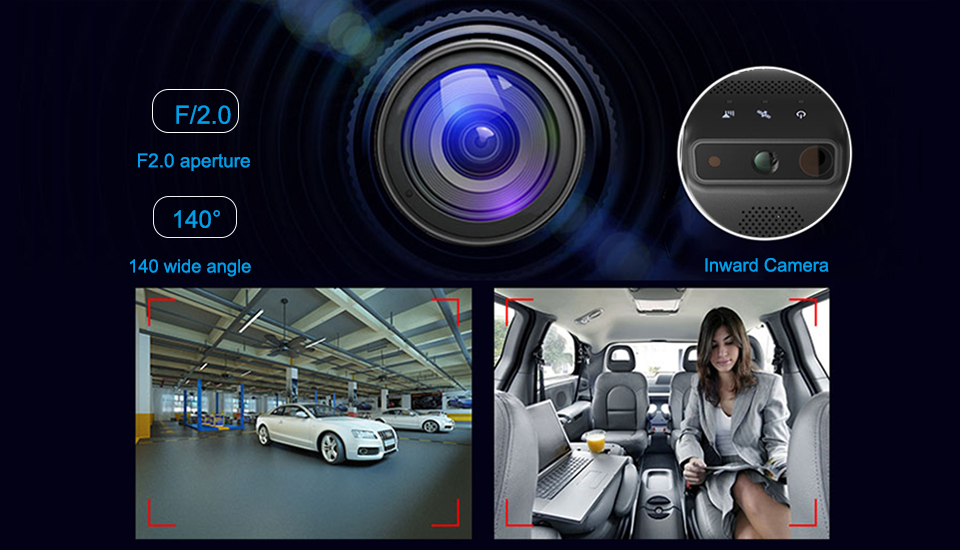 4. Single Camera or Dual Camera
Some dashcams have two cameras, and there are two different designs:
● two separate cameras, respectively installed in the front and rear windows: the main purpose is to record the behavior of the car behind.  Disadvantages are installation and wiring trouble, and the back passengers can not be recorded.
● the body has two integrated cameras, both mounted in the front window: the main purpose is to record rear passengers, which is useful for Uber/ Lyft. It's simple to install. The recording of the rear passengers is limited, roughly equivalent to what you see in the rearview mirror in the middle.
The above two designs have a specific purpose and applicable population. For most people, a rear-end collision is the full responsibility of the rear vehicle. As long as you don't worry about the other party escape, the installation of the rear window recorder may not be much necessary. Of course, if you're in a less safe area, or if the traffic is too busy and too complicated that you're constantly worried about being scratched by cars parked on the roadside, it's better to have both front and rear recorders.

5. Precautions for purchasing a MicroSD card
Most dashcams use MicroSD cards to store video. There are two factors to consider when choosing a memory card:
● capacity: for 1080P recording, it is recommended to use 32G / 64G, which can record about 5/10 hours. 4G/8G can only record about half an hour / 1 hour, but 128G may not necessary. 1440P HD recording suggests choosing 64 gigabytes.
● RAM speed: for 1080/1440p, Class 10 is sufficient, referring to the minimum write speed of 10MB per second. Unless you're recording 4K video, there's no need to use u-3 (30 MB per second) or higher.
Note: up to 20mb/s refers to the theoretical writing speed of up to 20mb/s, while C10 refers to the minimum writing speed of 10MB /s.

Here, we recommend JC400 dashcam for your reference.
It is not only equipped with the functions mentioned above, but also features DMS and driving behavior analysis.  There are two versions, one is with separated cameras, and the other is with integrated cameras, making it applicable for different application scenes.
JC400 definitely would be the star product in the market because of the stylish design, cutting-edge technology and reasonable price. Feel free to contact us if you want to catch the new market opportunity and hit the market together!